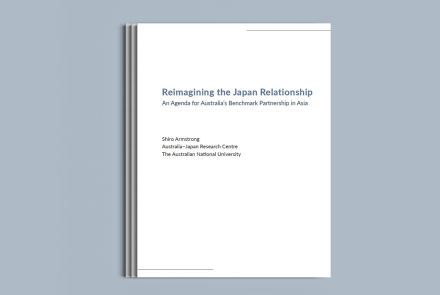 Dr Shiro Armstong is a Research Fellow and Co-Editor of East Asia Forum. Shiro’s areas of expertise include International Economics and International Finance and Government and Politics Of Asia and The Pacific. He currently teaches Masters Research Essay (IDEC8011).

The Australia-Japan Research Centre launched a major report on “Reimagining the Japan Relationship: An agenda for Australia’s benchmark partnership in Asia” commissioned by the Australia-Japan Foundation. In preparation for the report, the Taskforce spoke to over 290 individuals across the country from government, business and academia.

Australia’s relationship with Japan has never been more close but the Japan relationship must be reimagined if it is to deliver its full potential and cope with accelerating economic, environmental and social changes in both countries and a dramatically changing geopolitical environment.

The report suggests a new way for Australia to think about Japan, and what is needed to build the institutional support and infrastructure that is necessary for a deepening relationship.

Stakeholder and community engagement was key to the success of this project. See the Submissions that contributed here.

AJRC thanks the Australia-Japan Foundation for their generous support of the project.

Filed under:
Tags:
Australia and Japan