Japan–China relations back on track 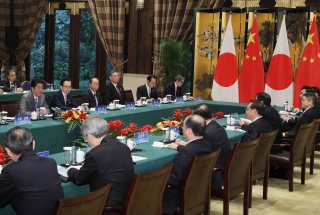 At a Japan–China summit on 17 November 2022, Japanese Prime Minister Fumio Kishida and Chinese President Xi Jinping met face-to-face for the first time in three years. 2022 marks the 50th anniversary of normalised diplomatic relations between Japan and China. A meeting full of smiles allowed both countries to maintain appearances and celebrate the occasion.

Kishida and Xi’s meeting was important in several ways. It put bilateral relations back on track — the trajectory pursued by former Japanese prime minister Shinzo Abe from 2014. Though major issues such as the Senkaku Islands dispute cannot be resolved in the short term, this improvement will allow top-level exchanges to be held regularly. In other words, it is a second normalisation of relations. In November, both a Japan–ROK summit and a China–ROK summit were held, making it possible to also realise a Japan–China–ROK trilateral summit.

The Xi–Kishida meeting showed that despite tensions, both sides are trying to avoid conflict. At their summit, both countries agreed to swiftly begin operations for a hotline between defence authorities under the maritime and air communication mechanism. Leaders also agreed to strengthen communication through the Japan–China security dialogue. Previously, even negotiations to build such mechanisms could not be held.

In authoritarian regimes like China, leaders can be briefed based on biased information. Because of this, even the exchange of views between Japan and China is meaningful from a communication standpoint. Chinese Coast Guard vessels frequently enter Japan’s territorial waters, but this was not much of an issue when it happened right before the summit meeting. Since China is increasingly active in territorial disputes with Japan — for example, Chinese public vessels are more frequently entering the territorial waters of the Senkaku Islands — frameworks to prevent the amplification of problems are needed more than ever before.

The meeting showed that China continues to value stable relations with major powers, as Xi mentioned at China’s 20th National Party Congress. For this reason, he also recently met with German Chancellor Olaf Scholz and US President Joe Biden. The summit with Japan is part of this policy.

Some argue that Xi’s goal in meeting with Kishida was to discuss economic issues. Domestically, China currently faces substantial economic problems. But China is not as economically reliant on the West as it was during its reform and opening-up. Even as China maintains supply chains with the West, its biggest trading partner is ASEAN. This means that China is decreasing its dependence on Western supply chains.

Japan and China reaffirmed the possibility of ‘cooperation’ at their November meeting. Kishida emphasised the importance of a ‘constructive and stable relationship between Japan and China’. President Xi also stated that ‘there is a wide range of common interests and possibilities for cooperation between the two countries’. As the security environment around Japan has seriously deteriorated, the two countries agreeing to at least explore the possibility of cooperation is significant.

But even as Japan and China both try to avoid conflict and promote cooperation, China’s military pressure on its neighbouring countries continues. China–Russia joint military exercises in waters around Japan have increased. Japan is under military pressure from three countries — China, Russia and North Korea. A new national security policy will be adopted in line with three key newly revised documents on national security. These documents — the National Security Strategy, National Defense Program Guidelines and Medium Term Defense Program — are expected to be announced in December 2022.

On the other hand, China is spreading the discourse at home and abroad that it is being encircled by US-led efforts such as the Quad, AUKUS and Five Eyes. On the Taiwan issue, China argues that military tensions are rising in the Taiwan Strait as a result of US and Japanese support for the pro-independence administration of Taiwanese President Tsai Ing-wen. China never says that these problems are caused by its own military power expansion, instead claiming that other countries create the issues.

Though Japan–China relations may actually be tracking towards improvement, it is only to the extent of leaders holding top-level meetings. It is important that the two countries establish a communication mechanism, but Chinese Coast Guard actions near the Senkaku Islands and the PLA’s activities around Japan are expected to increase. China also does not make concessions on issues related to its core interests. It aims to catch up to the United States by 2049 — including in terms of military power. As long as this goal does not change, Japan will suffer from substantial ramifications.

If Kishida makes too many compromises on China, the Japanese public will strongly criticise him for being weak-kneed. This kind of domestic political risk was not necessarily as strong for Abe, who was a conservative politician. Since Kishida is considered a liberal, he has no choice but to be cautious about policies towards China. That said, Xi is also cautious towards relations with Japan due to sensitive issues including historical recognition, territorial disputes and the Taiwan issue.

For now, we cannot expect the Japan–China bilateral relationship to change dramatically.

Dr Shin Kawashima is Professor in the Graduate School of Arts and Sciences, University of Tokyo.

This article was translated by Haruna Minoura.

Image taken by 内閣官房広報室 and sourced from Wikimedia Commons.