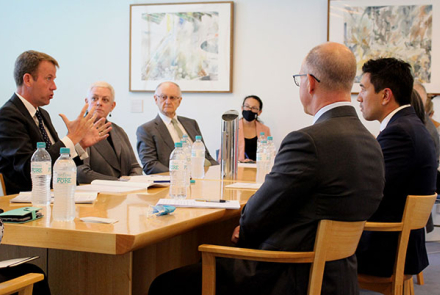 Dr Shiro Armstong is a Research Fellow and Co-Editor of East Asia Forum. Shiro’s areas of expertise include International Economics and International Finance and Government and Politics Of Asia and The Pacific. He currently teaches Masters Research Essay (IDEC8011).

Australia needs to make big investments in understanding Japan and its institutional linkages, according to a report by the ANU Australia-Japan Research Centre (AJRC).

The report, Reimagining the Japan Relationship: An agenda for Australia’s benchmark partnership in Asia, identifies key areas needed to build on the current relationship between Australia and Japan.

These include a new way for Australia to think about Japan, and what is needed to build the institutional support and infrastructure necessary for a deepening relationship.

The report says Australia’s relationship with Japan has never been closer but the Japan relationship must be reimagined if it is to deliver its full potential and cope with accelerating economic, environmental and social changes in both countries.

The report also suggests that complacency and failure to upgrade the relationship will weaken its effectiveness.

“We couldn’t have asked for more, in terms of the Minister’s interest and positive reception the Report,” Dr Armstrong said.

The meeting was followed by the Japan Update dinner, hosted by AJRC and the Japan Institute.

Melanie Brock, visiting from Japan and recently appointed a Member of the Order of Australia (AM) for her contribution to Australia-Japan relations, delivered the keynote speech.

Her speech explained the changes in Japanese society as a result of the COVID-19 pandemic, and suggested how to strengthen relations between the two countries.

Her remarks highlighted the importance of making the Australia–Japan relationship about more than defence and security, emphasising that “the people-to-people links and the economic relationship cannot be taken for granted”.

“Business as usual was no longer an option,” Ms Brock said.

The dinner brought together a prominent group from academia, government and business from around the country, with people traveling from Melbourne, Sydney and Brisbane to attend.

The ANU is a leading centre of Japan studies in Australia, and contributes to the national debate about the relationship with Japan through the AJRC and Japan Institute.

The Reimaging the Japan Relationship report can be found here.