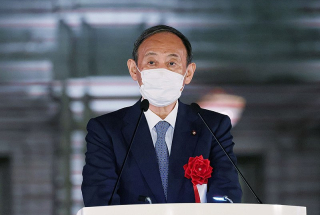 On 1 November 2016, the General Affairs Council of Japan’s Liberal Democratic Party (LDP) approved a proposal to allow party presidents to run for a third consecutive term. This decision paves the way — pending a rubber stamp vote on the proposal at a party congress in March — for Prime Minister Shinzo Abe to continue in his current post past September 2018. If he serves a third term as party president and the LDP continues its current dominance of Japanese politics, Abe will become Japan’s longest serving prime minister of the postwar era.

That a one time political washout like Shinzo Abe is likely to march into the history books as the most durable prime minister ever has garnered a lot of attention and commentary. But there is an even greater milestone to consider. On 7 July, Yoshihide Suga began his 1,290th day as Chief Cabinet Secretary (CCS), becoming the longest serving CCS in Japanese history.

Most of the world is unaware of the CCS and the role they play in Japanese government.

Most of the world is unaware of the CCS and the role he (they have all been men) plays in Japanese government. Those aware of Suga’s existence know him as the Abe government’s chief spokesman. But the CCS is so much more than that.

The CCS is not one job; it is five, at least. The CCS holds two scheduled press conferences a day, providing the, sometimes off the cuff, official word of the Japanese government. The CCS is also the Chief of Staff for the Prime Minister’s Residence and the Prime Minister’s Secretariat. He serves as the gatekeeper of the prime minister’s office and the coordinator of all policy initiatives. From time to time, the CCS can also be a political bodyguard, guiding the prime minister around political danger.

Japanese political lore likens the CCS to a political ‘wife’ (nyobo), providing the prime minister with encouragement and a stable environment. Thus Suga checks to make sure Abe is presentable when he goes out before an audience, looks over and sometimes rearranges Abe’s schedule and burnishes a positive public image while providing witheringly critical appraisals in private.

Administrative reforms since the 1990s have made the CCS even more vital to Japanese governance.

If the above were not enough, administrative reforms since the 1990s have made the CCS even more vital to Japanese governance. Former prime ministers Nakasone, Hashimoto and Koizumi consolidated the ministries, installing the Prime Minister’s Residence and Cabinet Office (Naikakufu) as the chief coordinator of bureaucratic policymaking machinery. An ancillary development of these reforms was the proliferation of advisory councils (shimon kaigi) and Cabinet councils (kakuryo kaigi) attached to the Prime Minister’s Residence, offering him advice — if not entire political programs — that reduced bureaucrats to supporting roles.

At the same time, LDP reforms have strengthened the party secretariat’s control, increasing the party’s capacity to answer to the coordination efforts of the Prime Minister’s Residence and undermining the influence of the so-called policy tribes (zoku) of the LDP interested in promoting the initiatives and powers of a particular ministry.

The CCS stands as the master node of this hierarchical yet distributed, disciplined yet pluralist policy producing network — the head of a policy octopus with arms reaching out and probing in all directions.

Under Suga, the CCS has gained an even greater power: control over bureaucratic appointments.

Under Suga, the CCS has gained an even greater power: control over bureaucratic appointments. In May 2014, the Cabinet Bureau of Personnel Affairs (CBPA) opened its doors bringing all the previously autonomous personnel departments of the government’s ministries, agencies and offices under one roof. The CBPA has the power to evaluate, elevate or sidetrack Japan’s top 600 bureaucrats. This gives it the means to enforce bureaucratic loyalty to the nation and the elected government, rather than to the ministry in which the individual bureaucrat serves.

While CBPA is nominally under the direction of a state minister, conventional wisdom has Suga exercising his authority as head of all Cabinet affairs to supervise and guide CBPA final decisions. With their careers under the direct control of elected officials, bureaucrats are understandably wary of exhibiting anything but enthusiasm for the policies of the current government and ruling party. It is perhaps impossible now for bureaucrats to wage wars of attrition against policy changes or politicians they do not like. Instead, they must resort to guerilla actions like leaking damaging information to the press or slow implementations of political orders.

The difficulty of finding a suitable CCS is a major contributing factor to the embarrassingly short terms in office of most Japanese prime ministers.

With all these powers and responsibilities, can any one person be suitable to serve as CCS? Using Suga’s tenure and success so far as evidence, the answer seems to be yes. But that yes comes with a few caveats. The odds that a prime ministerial hopeful will come across a fellow politician of the right age, the right temperament, the right political faction, with close ties to the bureaucracy, complete mastery of all aspects of policy and an utter lack of ambition for the premiership are vanishingly small. The difficulty of finding a suitable CCS is a major contributing factor to the embarrassingly short terms in office of most Japanese prime ministers.

For every pairing, like Yasuhiro Nakasone and Masaharu Gotoda, Jun’ichiro Koizumi and Yasuo Fukuda and Abe and Suga, there is a vast wasteland of administrations done in by the likes of Yasuhisa Shiozaki, Hirofumi Hirano and Yoshito Sengoku. Even astute and eloquent politicians like Kaoru Yosano or Mikio Aoki have struggled with the responsibilities of the office.

The question that should be captivating Japan and the world is not whether Abe can go on and on in office but whether Suga can and what happens if he can’t.

Michael Cucek is an Adjunct Professor of Political Science and History at Waseda University and Temple University, Japan.

Image taken by 首相官邸ホームページ and sourced from Wikimedia Commons.