Will Japan's population shrink or swim? 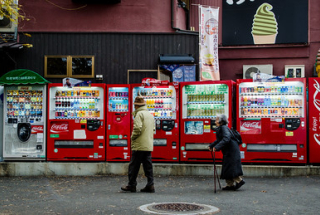 An elderly couple walk in front of a row of vending machines in Miyajima, Japan on 4 January 2014. Source: Michael Kofteros/Flickr.

After hovering around zero growth in the late 2000s, Japan’s population has been shrinking since 2010, with the decline accelerating in recent years. Breaking its own record every year for the last 10 years, the country experienced another record population loss of 644,000 in 2020–2021. The population is projected to shrink well into the middle of this century, dropping to an estimated 88 million in 2065 — a 30 per cent decline in 45 years.

Japan’s rapid population shrinkage is primarily caused by persistently low fertility. Japan’s fertility rate has been declining since the mid-1970s, reaching a total fertility rate (TFR) of around 1.3 children per woman in the early 2000s. Japan’s TFR hit a low of 1.26 in 2005, but there was a modest recovery to a TFR of around 1.4 in the 2010s.

There is little out-of-wedlock childbearing in Japan. Childbirths outside of marriage have constituted around 2 per cent of all births since the 1950s. The decline in Japan’s fertility rate is mainly due to fewer young women getting married.

Young Japanese women are increasingly reluctant to marry and have children in part due to the rapid improvement of their economic opportunities. Women’s participation in four-year college degrees began to rise rapidly in the late-1980s and reached 51 per cent in 2020. The employment rate of young women also increased significantly. The labour participation rate of women aged 25–29 almost doubled from 45 per cent in 1970 to 87 per cent in 2020.

Japan’s declining marriage rate is also attributable to the persistence of traditional domestic gender roles, which place a heavy burden on women to manage housework and childcare. Japanese men’s contributions to domestic tasks remain very low and the gender imbalance in domestic labour is still notable.

The persistence of unequal gender roles at home in the face of expanding economic opportunities for women has made balancing work and family life very difficult for married women — lessening the appeal of marriage.

Out of concern about the social and economic consequences associated with prolonged low fertility and rapid population ageing, the Japanese government launched a series of programs addressing low fertility (‘shoushika-taisaku’) in the mid-1990s. The initial focus was to provide parenting assistance through increasing the provision of childcare services and advocating for a better work–life balance.

Alarmed by the slippage of fertility rates and the onset of population decline in the late 2000s, Japan’s policy efforts have become more comprehensive. Japanese governments have advocated for long-term policy assistance from birth to young adulthood. In the 2010s, low fertility became an integral part of Japan’s overall public policy direction. Low fertility policies were incorporated into Japan’s macroeconomic policy, national land planning and regional and local development.

Despite these continuous and comprehensive efforts to increase the fertility rate, Japan’s policies have fallen short of achieving increases in fertility that would mitigate the social and economic effects of population decline and ageing. Still, Japan’s policies have halted a further slide in the fertility rate. Unlike other East Asian economies such as South Korea and Taiwan, whose TFR in 2021 dwindled to 0.81 and 1.07, respectively, Japan’s rate remained at 1.30.

Japan’s experience shows how difficult it is to restore fertility to the replacement level, especially when a country has a sizable population and a persistently low birth rate. It also seems unrealistic to counter Japan’s rapid population decline through an immediate and drastic increase in international migration by liberalising the country’s immigration policies. The number of deaths in Japan is expected to rise in the next few decades owing to increases in the elderly population.

That means the country has no choice but to strengthen efforts to sustain and, hopefully, boost fertility. To do this, Tokyo should help women and couples balance their work and family roles to lighten the heavy social and economic costs associated with population decline.

Japan’s labour market needs to become more family-friendly, while gender roles at home must become less traditional. Even if policy efforts to make the workplace more family-friendly and the home more gender-equal fail to raise fertility and slow population decline, they will likely improve the wellbeing of Japanese families by improving the quality of family life.