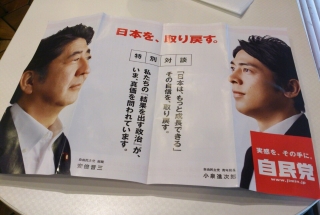 Hereditary political succession is not limited to monarchical and autocratic systems of government. Politicians from families that have previously occupied high office take top positions in many democratic countries. In Japan, hereditary politics show little sign of abating.

Liberal Democratic Party (LDP) politicians who inherited their seats accounted for about 45 per cent of the National Diet, Japan’s parliament, in the early 1990s. One would think that as Japan matured as an industrialised democracy, there would be more newcomers and less room for political inheritance. That’s far from the case.

It is not just so-called second-generation politicians who seek and hold political office. The numbers of third- and fourth-generation hereditary politicians are also on the rise. Even today, roughly 30 per cent of the Lower House and 40 per cent of LDP parliamentarians come from political families.

One would think that as Japan matured as an industrialised democracy, there would be more newcomers and less room for political inheritance. That’s far from the case

Ishiba’s father once served as Japan’s home minister and as governor of Tottori, their home prefecture. Shigeru Ishiba himself has held powerful roles such as minister of Defense and of Agriculture, Forestry and Fisheries.

Kishida served as foreign minister under Abe in 2012-17. His father and grandfather were once members of the Lower House.

Kono replaced Kishida as foreign minister in mid-2017 and is the son of Yohei Kono, who was the longest serving speaker of the Lower House and an LDP heavyweight. Taro Kono’s grandfather was also a politician.

Internal Affairs and Communications Minister Seiko Noda, who also holds leadership ambitions, comes from a political family too. Her grandfather was a member of the Lower House and served in ministerial positions.

Looking even further into the future, Japan’s next generation of leaders and prime ministers are also hereditary politicians.

Looking even further into the future, Japan’s next generation of leaders and prime ministers are also hereditary politicians

Yuko Obuchi is the daughter of Keizo Obuchi, who served as Japan’s prime minister from 1998 to 2000. Keizo Obuchi’s father was also a parliamentarian. After Keizo Obuchi’s sudden death while in office, Yuko Obuchi inherited her father’s seat at the age of 26. She became the first female minister of Economy, Trade and Industry at the age of 40, which is considered young in Japan for a senior ministerial position. Many commentators and media outlets consider her prime minister material, even after a political funding scandal in 2014 that forced her to resign from the portfolio.

In a February 2018 poll, Shinjiro Koizumi ranked second in the prime ministerial race (following Abe, while Ishiba came third). Shinjiro Koizumi is the son of the popular and reform-minded former prime minister Junichiro Koizumi, who served in 2001-06. While Shinjiro Koizumi has yet to take a cabinet position, he has been elected as a member of parliament four times in his father’s former seat and has served in junior ministerial positions. His popularity was demonstrated by his election as an LDP member in 2009, in a year when many veteran LDP politicians lost their seats due to a tsunami of support for the opposition Democratic Party of Japan. Dubbed Japan’s ‘Macron’, Koizumi is quietly preparing himself to be a front-runner.

Finally, Yasutaka Nakasone is a freshly minted parliamentarian, elected for the first time in 2017. His father, Hirofumi Nakasone, was once Japan’s foreign minister and his grandfather, Yasuhiro Nakasone, was one of Japan’s longest serving prime ministers. Although still a first timer, Yasutaka Nakasone’s political ancestry and young age of 36 mean he stands a good chance of serving in top ministerial positions in the near future.

Although there has been much talk about reforming the political system to reduce the influence of hereditary politicians, inheritance politics is still alive and kicking in Japan.

As long as the personal local support organisations and vote gathering mechanisms remain strongly embedded in the political system, it is hard to imagine a significant decline in the number of hereditary politicians occupying key political positions in Japan. Democracy through inheritance leaves only a small window of opportunity for newcomers to rise to the top.

Purnendra Jain is Professor in the Department of Asian Studies at the University of Adelaide. Takeshi Kobayashi holds a Master’s degree in International Relations from American University, Cairo and currently serves as a staffer to a House of Councillors member.