The old and the new in Abe’s revamped administration 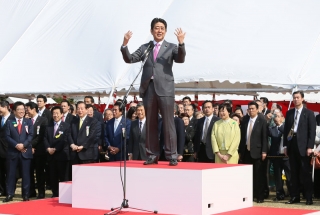 Now that the dust has settled on Abe’s new cabinet and executive line-up in the ruling Liberal Democratic Party (LDP), what are the main takeaways in political and policy terms?

In political terms, the most obvious is that Prime Minister Abe has preserved what he calls ‘the Abe administration’s trio’ — the tightly knit group of Chief Cabinet Secretary Yoshihide Suga, Deputy Prime Minister and Finance Minister Taro Aso, and the Prime Minister himself. Abe has also retained his strongest backers in the party: Secretary-General Toshihiro Nikai and Vice-President Masahiko Komura.

Prime Minister Abe has preserved what he calls ‘the Abe administration’s trio’.

On the plus side, this means that Abe can continue to rely on a strong group of ‘Abe loyalists’ in a crisis. The group also represents stability and continuity at the top levels of government while, at the same time, allowing Abe more flexibility to select cabinet ministers. For example, Abe could now choose those with wide experience or with different views from his own instead of selecting friends and allies regardless of merit — one of his main failings in the past. LDP veterans reportedly advised him that friends were taboo and that he needed to appoint from among ‘those most distant [from him]’ otherwise he wouldn’t have a government.

Seiko Noda, the new Minister of Internal Affairs and Communications, is a good example of an LDP politician who has kept her distance from the Abe administration. Likewise, new Foreign Minister Taro Kono exemplifies a politician who, while supporting constitutional reform, is ideologically distant from Abe on issues such as the Yasukuni Shrine. Kono may also take steps to promote the kind of ‘liberal diplomacy’ that is an anathema to the conservative wing of the LDP, including Abe.

Deep questions remain about Abe’s honesty and integrity in dealing with a number of recent scandals.

At the same time, the presence of many experienced ministers in the cabinet will undoubtedly help to restore its approval ratings and enable Abe to project the appearance of ‘safe driving’ as a top priority. In particular, Itsunori Onodera and Taro Kono as the new defence and foreign ministers respectively will potentially form a good partnership.

The downside is that while a cabinet reshuffle is supposed to push the ‘reset’ button for a government to freshen up its image, Abe’s administration is still led by politicians whose standing has been considerably damaged (Abe and Suga), or is declining (Aso). Deep questions remain about Abe’s honesty and integrity in dealing with a number of recent scandals.

Apart from former defence minister Tomomi Inada volunteering her resignation in spite of Abe’s ‘excessive protection’ of her, the other key issues leading to the reshuffle in the first place, such as the Kake Gakuen scandal, have not been dealt with adequately. Some who were subject to harsh criticism might have lost their positions — for example, former minister of education, Hirokazu Matsuno — but Abe has not cleared the decks with any admission of his own regarding activities many voters suspect he is guilty of, namely ‘doing favours for friends’.

If Abe prioritises constitutional reform, it is unlikely that economic policy reform will make much progress.

Suga may also prove to be a risk. He was complicit in denials of any wrongdoing and the public are increasingly growing tired of him as chief government spokesperson, particularly his habit of blocking commentary and his refusal to recognise problems and to answer questions properly. The concentration of power in the chief cabinet secretary on policy matters may also become more of a problem in the future, including on fiscal policy where, as political commentator Takao Toshikawa has observed, Suga has acted as ‘Abe’s enforcer’.

Here, the prospects become murkier. One of Abe’s favourite manoeuvres when his administration faces strong headwinds is to immediately ‘get back to basics’ and switch the policy focus once more to restoring Japan to strong economic growth. This time is no exception. As a diversionary tactic it may work but whether Abe can deliver the goods is another story altogether.

One question is whether Abe’s real priority is constitutional reform. Time is running out for him to act as the driving force on this issue. But unless economic reforms are also strongly pushed by the Prime Minister’s Office, they will not proceed successfully either. If Abe prioritises constitutional reform, it is unlikely that economic policy reform will make much progress. What is more, the new Minister of Economic Revitalisation and Minister of State for Economic and Fiscal Policy, Toshimitsu Motegi, although a ‘policy wonk’ who could lead the reforms, is not a ‘reformist politician’ and neither are the other economic ministers.

If Abe’s low approval ratings continue, it is unlikely he will dissolve the lower house and lead the party into a general election.

The drop in public support for the Abe administration also raises the bar for constitutional revision. The brakes will come from inside the Abe administration with former foreign minister Fumio Kishida’s appointment as chairman of the LDP’s Policy Research Council. He will lead an invigorated LDP in the policymaking process and exert a more moderating influence on the constitutional reform issue, on which the party might assume the driver’s seat.

If Abe’s low approval ratings continue, it is unlikely he will dissolve the lower house and lead the party into a general election. This strategy could reduce the number of seats held by the LDP in the lower house. Abe is more likely to have his eyes set on the LDP’s presidential election in September 2018 in order to retain his position and implement his original plan to shepherd constitutional reform through the party and the Diet by 2020. However, he has lost his aura of invincibility and the real question is whether he will ever be able to regain it.

Aurelia George Mulgan is a professor in the ADFA School of Humanities and Social Sciences at the University of New South Wales, Canberra.